If you haven’t seen Frozen II yet, I’m going to guess you do not have a young (or maybe not so young) female child in your life but I would highly recommend everyone see this movie.  I will be the first to say that I am not obsessed with Disney, I have friends that have been to Disney more times in the past 4 years than I’ve been in my whole life.  The Munchkin, at almost four, has only been to Disney while she was still baking on the inside and we didn’t even know she was a she.  However, this movie had so many good lessons for the adults wrapped up in an entertaining movie that even the Mr. is excited to pre-order it. 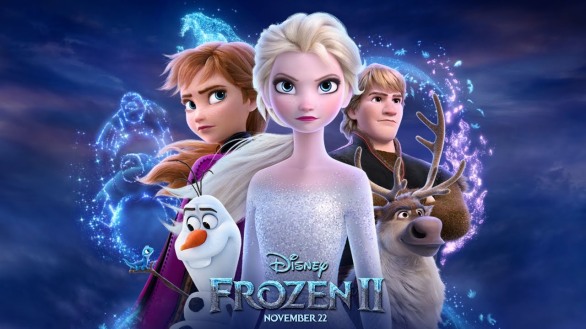 **Note: Frozen and all related material are property of Disney, I’m just a woman, wife, and mom who thinks the messages in this movie are awesome.  I have tried not to include specific spoilers but if you haven’t seen it by now that’s not my fault ;-)**

In the beginning of the movie, Anna and Olaf launch into a song that’s so poignant about being together, sharing time and presence with one another in a Thanksgiving-esque celebration (around the time of the US release) that Elsa sings:

“I’m holding on tight to you” all the main characters say to each other and I got chills while sitting in the movie theater.  The characters are discussing how life is changing and it’s scary (more on that later) but being with each other is the most important and how “some things never change” like the love they have for each other.

The next song is a testament to Elsa wondering if she’s in the right place for her life.  Based on my calculation, Elsa is approximately 27-28 years old in Frozen II and that means she is hitting that age where women (in my experience, myself included) have followed “the path” (marriage, kids, career, etc..) that was set out for them and then they start questioning as Elsa does: “Every day’s a little harder as I feel my power grow/Don’t you know there’s part of me that longs to go…/Into the unknown?” Elsa wonders what following that voice is going to lead her.  Is it going to take her somewhere wonderful or distract her?  She’s comfortable where she is: “everyone I’ve ever loved is here within these walls.”  But she’s wondering if there’s more to life than what she’s living.  This seems to parallel what happens around that age, many of us have been told what our lives should be or look like and we have finally started to open up to the possibility that there could be more if we were just willing to go “into the unknown”.  This was the age where I decided to divorce my first husband, I wanted some thing more, something that involved a little adventure and I didn’t see him as the partner for that for many different reasons.

Now it is Olaf’s turn for his questioning.  Olaf is aproximately 6 years old and he sings a song about how things will make more sense when he’s older:

I think it’s interesting how Olaf believes “that will all make sense when I am older” and his wishing to be older because “absolutely everything makes sense” which sometimes I think how kids (the Munhckin and my students) see adults because we’re so good at pretending that everything makes sense and everything is fine.  I have witnessed first hand how the diseases of perfection and comparison have invaded our culture both as a teacher and a mom.  I’ve seen how students are interested in just getting the right answer without actually trusting the process.  Some of that is laziness (biology is inherently lazy) but some of it is the need to have the “right” grade and if you don’t have the grade then you aren’t worth it.  That external validation of doing a good job is creating students who don’t have their own compass.  And teenagers who don’t have their own compass become adults who don’t have their own compass and fall into the trap of not knowing what actually fulfills them.  Which leads me to the next great song:

Elsa goes on the journey into the unkown following “The Voice” to find some answers:

The Voice: Show yourself
Step into your power
Grow yourself
Into something new
You are the one you’ve been waiting for
Elsa: All of my life
The Voice: (All of your life)
Both: Oh, show yourself

As I’ve moved through my third decade on this planet I’ve had to work on re-finding that which fulfills me and ignites my heart and soul; I’ve had to follow “the voice” that got crowded out by upper middle-class suburbanite societal trappings but through reconnecting with myself and working on the connection with the Munchkin and the Mr. I have been able to find those things again and remember what it is that really makes me feel like a whole person and not someone just going through the motions.

The evolution of Elsa through this movie really highlighted the growth of myself through my 20s and now as I am cruising into my 40s.  By the end of the movie she is really embracing her powers, what they mean, and what path she should be on as opposed to the path she was put on by trying to hide who she truly is (AKA her frozen powers). by following “The Voice” she has found her voice.

Elsa’s growth was the theme that stuck out for me personally but then there was Anna’s ability to do “the next right thing”, the nature of Kristoff’s non-toxic masculinity (highlighted by an awesome 80’s style ballad that had the Mr. and I cracking up) because his “love isn’t fragile” right through to the discussion of indigenous people’s lands and control.  There were so many great themes and thought-provoking moments in this movie that it is definitely worth the time and energy to watch it.

View all posts by insidethemessylife